One look at the beam engines and maybe the first thing that comes to mind is what amazing bits of engineering they are; all the parts working together, and who can resist the romance of steam?

But their real story is not about engineering. It’s really about death, drains and the work of a borough council to protect the health of the people living in the town.

Beam engines really matter to Portsmouth. Think about it, we live on what’s pretty much a totally flat island, so we have a big problem getting rid of our waste water and…. sewage! The only way to get things moving is to pump it along.

In 1863, Portsmouth Borough Council started working on the problem at a time when the island was becoming more built up. They came up with a system that used gravity to move waste through a high level and low level sewer system towards Eastney, so it could be flushed away into Langstone Harbour. The only problem was the sewers had to slope down towards Eastney so much that by the time it got there it had to be pumped up again to reach the outfall.

Enter our first set of two beam engines, made by Clayton & Company. They were installed in the small brick engine house which still stands next door to the museum building in 1868 (they are no longer there as they were scrapped in 1923). These engines did a reasonable job of keeping the poo on the move but there were ‘issues’. Since not all the sewage could be pumped out when the tide was at its fastest, some got left behind, where it lurked on the shoreline around Eastney. Clearly, something else needed to be done.

So, in 1882 after a reward of £500 was offered, a new plan was devised. It involved two new and more powerful beam engines and huge tanks. The engines were made by James Watt & Co, and installed in 1886 in the specially built engine house we now think of as the museum. They pumped the sewage to tanks which could hold 4.5 million gallons. This meant that when the three outfall pipes were opened at high tide, it only took 1 hour to empty, which in theory meant everything got washed away!

The beam engines we see today remained in service until 1954, although newer and more powerful gas engines were installed in 1902 in a separate building nearby. They (and the building they are in, plus the site around them) were transferred to Portsmouth Museums in 1968. 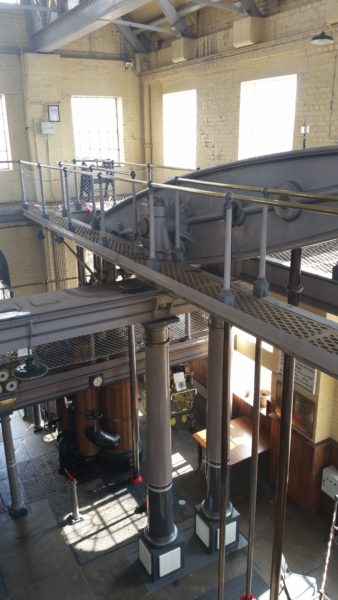