It’s a weird, small, engraved silver shovel, in a dome. So what’s the connection between this object and Eastney Beam Engine House?

Full view of the shovel

Well, this is the shovel that dug the first holes to begin the work on the sewage tanks at Fort Cumberland. The beam engines would continuously pump sewage to the tanks, which were then emptied at high tide.

The handle is engraved: ‘Presented to James Moody Esq., Mayor of Portsmouth, As a Memento of the Ceremony of Commencing The Works by Breaking the Ground on the Site of the Sewage Tanks & Outfall at Fort Cumberland Sept. 22 1885’.

The occasion was recorded in great detail in the Portsmouth Evening News for Wednesday 23rd September 1885. The Mayor and Corporation “proceeded in state to the site selected for the erection of the new sewage tanks by Fort Cumberland, Eastney.” They assembled at the Guildhall and then travelled in carriages to Fort Cumberland for the ceremony. A marquee had even been erected on the site so a crowd was able to watch. 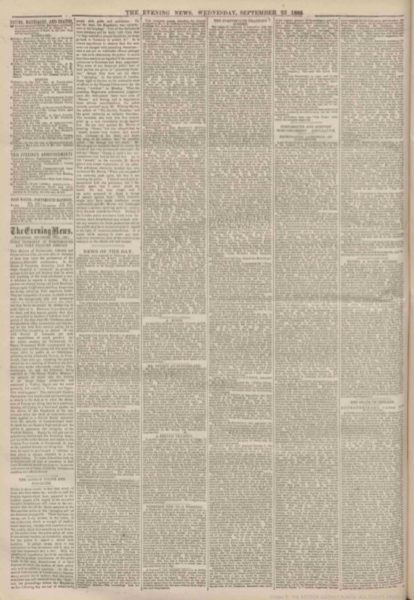 The Portsmouth News’ record of events

After speeches, the newspaper records that Mr J. M. Burt of Mowlem and Co., which was constructing the tanks, presented the Mayor with “a handsome wheelbarrow and spade, in polished oak and silver, supplied by Messrs. H.M. Emanuel and Son, Ordnance-row, Portsea. The Mayor then dug three sods, and having placed them in the barrow ran them up an inclined plane and turned them over amid cheers.”

The museum also has the wheelbarrow in the collection. It is quite rare for objects to have such a clear background, which makes them extra special.

The shovel can now be seen at Portsmouth Museum and Art Gallery, where it is on display.