While wandering around the beam engine house at Eastney it is easy to get completely distracted by the engines and the building. In doing so, however, you could miss some of the smaller details – including this plaque. It’s fixed quite high up on the engine house wall but it marks a really important moment in the history of the place: the day it officially started pumping poo for Portsmouth!

The big occasion took place on 9th May 1887. It was one of those great Victorian civic events which reflected their pride in the steps being taking to keep Portsmouth much cleaner and healthier. The event was attended by the whole borough council, as well as leading citizens and representatives from the Army and Navy. 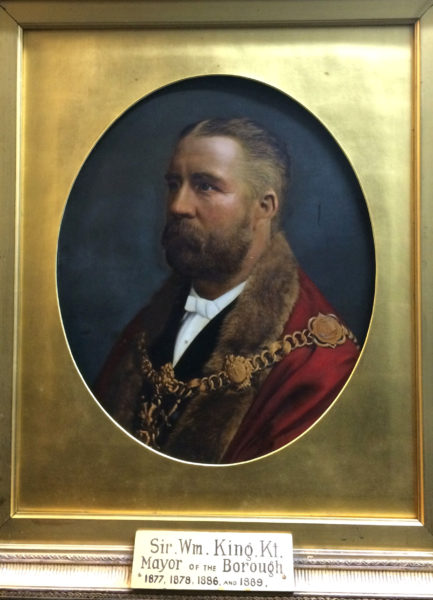 The event began with the official starting of the engines by the Mayor, Alderman William D. King. He climbed up to one of the platforms in the engine house and gave a speech, talking about the engines and how they would be able to deal with the town’s sewage for many years to come. At this time the Clayton beam engines were still in their building next door and were being upgraded to act as back-ups to the new engines. What happened next is recorded in the Hampshire Telegraph and Sussex Chronicle:

“His Worship proceeded to the starting gear, and the massive cranks having been worked up to the centre he started first one engine and then the other, the ponderous beams ascending and descending with marvellous ease and rapidity, and the whole machinery appearing to work smoothly and without the slightest hitch. This action of the Mayor’s was the practical commencement of the pumping of the sewage into the new reservoirs at the outfall, and the company appeared deeply interested in watching the lifting of the fluids after they had passed the gratings which have been fixed to prevent the passage of solid matter and the innumerable foreign substances which find their way into the sewers.”

After this everyone went over to the site of the new sewage tanks at Fort Cumberland to officially open the new outfalls into Langstone Harbour which was done with much ceremony:

“In the space of a few seconds the sewage was coursing through the three discharge pipe, and emptying itself rapidly into the fast ebbing tide… borne seaward in the direction of the English Channel, its course being clearly defined by the discolouration of the water in an almost direct line for a distance of about half a mile.”