What to see and do

The first thing to take in on a visit to Eastney is the group of Engine Houses themselves. They form part of a Scheduled Ancient Monument and the buildings are all Grade II listed. These buildings include the 1865 pump house and boiler house; the 1887 boiler house, pump house and chimney; and the 1904 gas engine house.

The Engine Houses were built because Portsmouth desperately needed proper sewage disposal provisions. As the city is built up on a low-lying island it has poor natural drainage. This resulted in waste and sewage frequently polluting the water supply – which resulted in many deaths from cholera and other diseases.

Whilst a new drainage system was introduced in 1868, population increases meant significantly more power and capacity was soon required – and so the Eastney Engine Houses were built.

These engines aren’t just an engineering marvel, they also played an important part in improving the health and living standards of everyone in Portsmouth.

When they were retired from normal use, the beam engines were kept in operating condition as a backup until 1954. Maintenance of the engines and pumps was discontinued after 1954. Following extensive restoration, the Beam Engine House was opened as an industrial museum in 1972 and is now open to visitors on selected weekends alongside the Gas Engine House, also on site.

The Beam Engine House is an impressive Victorian building designed by Sir Frederick Bramwell and finished in 1887. It houses a pair of classic Boulton Watt beam engines and pumps which have been restored to their original 1887 condition.

Next door you can see the boilers that produced steam to drive one of the two beam engines. These boilers also produce steam for some of the smaller engines displayed nearby. Originally there were four enormous Lancashire boilers that occupied most of the space.

Displayed on the mezzanine level above the boilers are other small pumps which were used locally.

The pump house contains the two Boulton and Watt beam engines which operated the pumps that kept Portsmouth’s sewage system functioning.  The space is dominated by the wooden casings for the pistons and the rods leading to the pumps, as well as the flywheels that regulate the engines’ speed.

Much of the building’s internal structure is made of iron, and the windows are housed in cast iron. On the upper level you can see the crane used to lift the beams out for maintenance. 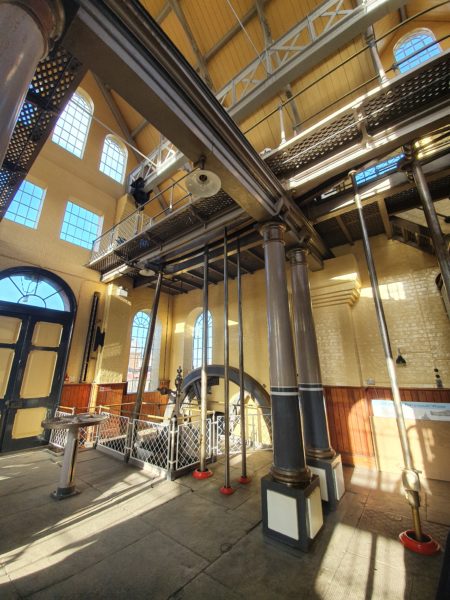 To the west of the Beam Engine House is Eastney’s Gas Engine House. The building originally contained a trio of 180 horse power double ended gas engines, each driving a 24 inch diameter Tangye centrifugal pump. However, only two of the three still remain.

The gas engines were installed in 1904 in response to residential and industrial expansion across Portsmouth – and the inevitable increase in sewage this brought. They future-proofed operations at Eastney, by being able to deal with at least six times the normal flow produced by the population of Portsmouth at the time.

Until 1954 the Gas Engine House operated alongside the Beam Engine House, and was converted to run on North Sea gas in 1971. Today the building is a part of the Eastney Engine Houses experience, holding open days once a month where visitors can meet the volunteer team responsible for its upkeep.